Hazel Newlevant is a Portland-raised, Queens-residing cartoonist. Their comics include If This Be Sin, Tender-Hearted, Sugar Town, and No Ivy League. They edited and published the anthologies Chainmail Bikini and Comics For Choice. They co-edited the anthology Puerto Rico Strong, published by Lion Forge Comics, which received an Eisner Award. Their comics have been honored with the Ignatz Award, Xeric Grant and the Prism Comics Queer Press Grant. They have worked as an Associate Editor at Lion Forge Comics, and are currently the social media manager of A Wave Blue World. They like to dance around, alone or with others.

Hazel may be available for freelance work or speaking engagements! Contact them at hazel@newlevant.com 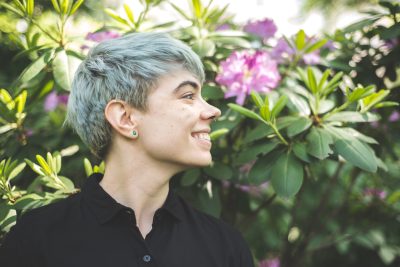 "Hazel Newlevant examines privilege and coming of age in No Ivy League," interview by Avery Kaplan, The Beat

“A Compendium of Resistance: Comics for Choice Fights for Reproductive Justice,” review by Catherine, Women Write About Comics